The Volkswagen e-Golf is ready for adventure, and here the purity of its electric power comes together with the brilliance of the UK’s best driving roads 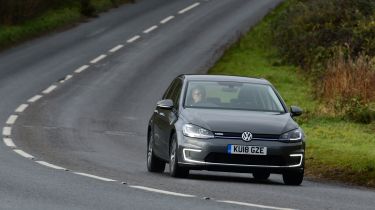 What makes a great driving road? The sinewy rise and fall of asphalt isn’t enough by itself. A good driving road will take you between places, between worlds, and offer an escape from the grind of the everyday. The scenery should make you want to slow down rather than speed up, and a good companion in the shape of your car should match your mood, too. Happily the Volkswagen e-Golf adds the serenity and calmness of electric power to the core brilliance of the Golf family, making it a perfect partner.

The effortless performance and near-silent running means you’ll be free to enjoy the scenery more than ever before.

B4425 Cirencester to Burford 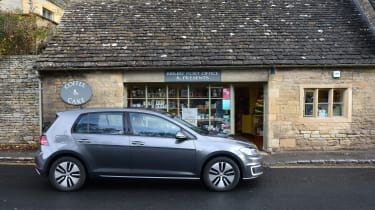 The A417 is as functional as dual carriageways get, despite the rolling Cotswold countryside it pierces, so it’s a delight to discover that just a few turns from the main drag deposit you at the beginning of a best-kept secret. The B4425 begins innocently enough on the fringes of Cirencester and arrows north-west out of Gloucestershire, luring you into thinking it is just another country road.

You soon start to notice it rises, falls and sweeps like a gentle rollercoaster, providing good sight lines to oncoming traffic but also across the scenery with pockets of trees, shades of green fields lined with hedgerows and quaint cottages that can only inspire envy. It offers turns that challenge the thrill-seeker, perfect for the e-Golf’s responsive steering, but it gets on with taking you somewhere, picking up the delightful village of Barnsley before moving you on to the wonder that is Bibury.

This is such a perfect definition of an English country village that it has appeared in a computer game, and Bibury manages to pull off the trick of appealing to coachloads of tourists regardless of the season while also remaining seemingly unspoilt, its National Trust status no doubt helping somewhat. The period buildings including the gorgeous Swan Hotel are postcard perfection as the River Coln squeezes beneath a bridge too small to accommodate modern traffic. The e-Golf fits in here perfectly, its silent powertrain allowing you to ghost past tourists at walking pace – so much so that you can hear the river making its way south west if you roll your window down.

Escape the clutches of souvenirs and tea rooms, and you are rewarded with a change of tack once again as the B4425 spears onwards, aiming at the Oxford-bound A40 towards another village of iconic Englishness: Burford. As it nears its conclusion, the road becomes ever-more direct with long, rolling straights that the e-Golf whisks along smoothly and silently, climbing the hills with ease and feeling at home in the tranquility of the countryside. It’s good enough to warrant a stop for tea before a return journey.

B4226 Broadwell to Buckshaft, Forest of Dean 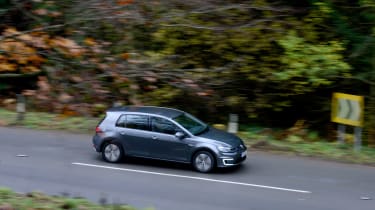 Out here in the depths of the Forest of Dean, it only takes a little imagination to believe you have jumped back in time to pre-civilisation where nature has free rein. Only the thin ribbon of asphalt winding out of sight ahead of you dents the illusion, but as we leave the small hamlet of Broadwell, and the e-Golf briskly reaches the national speed limit, the forest retains its air of the wild.

More than 40 square miles of woodland make up the Forest of Dean and a turn in any direction could lead you down another brilliant driving road, but the B4226 is the ideal mystery tour; such is the density of the forest that you can never tell exactly where it is heading. Occasional breaks in the line of trees afford you snapshots of the distance, rows of birch and fir standing tall in the background giving away elevation changes, allowing a brief moment of equilibrium before you are returned to the density.

Passing through the junction marking the village of Cannop, the scenery begins to level out. Cannop Ponds offers a chance to stretch your legs and enjoy the beauty of its nature reserve, just one of many signposted country parks and sites of natural or historical interest. Without warning, the B4225 begins to rise, twisting and climbing as you approach Speech House, originally a hunting lodge built for Charles II in the late 1600s before becoming the administrative building for the area. Today it is a hotel, making a perfect stopping point before pressing on.

Beyond Speech House the forest becomes thinner, allowing you to see deeper within and begin to appreciate not only its sheer size but also the diversity of the sights it offers. The e-Golf is the perfect companion for a road like this, a shot of instant torque to breeze past slow-moving farm machinery and a steady, frugal and near-silent cruise with a tranquility matching the surroundings. Past the arboretum, Speech House Road brings you gently into the outskirts of Buckshaft, but even having covered several miles with ease you feel like you’ve barely scratched the surface; there is so much more to discover.

A675 Bolton to Blackburn 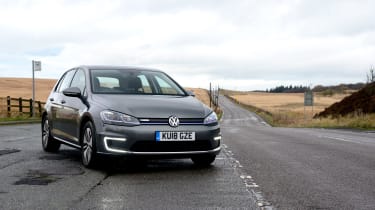 Any sat-nav worth the solder in its circuit board would push you along the M61 before turning east along the M65 to get you from Bolton to Blackburn. But a more pleasing way to make the same journey allows you to savour the pleasures as Greater Manchester becomes Lancashire.

Although the more modern A666 will get the job done more quickly, the A675 – the old Bolton to Preston road – takes you across the West Pennine Moors. They cannot claim the stature or possibly the status afforded to the main Pennine ranges, but they are all the more delightful for that. As you leave Bolton from the north, the left fork signposted Belmont suggests nothing more lies beyond it than a lesser route out of the town.

You travel a good half a mile, a gentle inclination all the way, before the houses start to thin out and you catch the first glimpse of the view across the moors. You can see the base of the valley, the road clinging higher up one side of it, with the towns of Bromley Cross and Eagley nestling within like model villages, but the A675 demands a further climb before you crest the rise and cross into the Blackburn border and the village of Belmont.

In the e-Golf it feels entirely natural to make the most of the free return on the other side of the hills, a gentle squeeze on the brake pedal or a sideways nudge of the gearlever engaging a feed of engine braking. It doesn’t create enough drag to even slow the car, yet the digital display shows the energy returning and the range increasing as a result. Just as the climb begins again the twin delights of the Springs and Dingle reservoirs hove into view before the A675 bowls into Belmont.

It’s not until you leave Belmont and draw alongside the vast reservoir that shares its name that the A675 really delivers its stunning conclusion. The road skirts around its extremities before slicing over its west corner, but it is the glorious sweeping panorama of the moorland that makes you want to cruise and not sprint. The road flows with the land as sweetly as the water, rarely breaking into anything approaching a tight curve. It reaches a natural conclusion at the junction with the M65 after seemingly endless straights and an infinite downhill before returning you to reality with a bump – but the pain of the conclusion is more than outweighed by the sweetness of the journey. 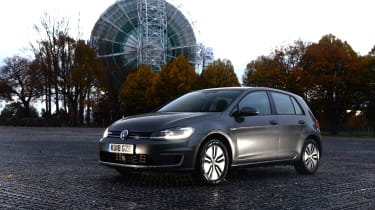 Like all the best driving roads, the B5359/A535 combo keeps its powder dry. As it leaves Alderley Edge it no doubt features on school run and shopping trip routes, but just a couple of gentle turns outside of the village instantly transport you into the swathes of stunning countryside that Cheshire contains, punctuated only by the desirable hamlets.

If anything the B-road plays second fiddle to the A-road in this duo. Not that the former disappoints in any way; it is the classic example of the breed, picking its way between the peaks and linking the towns while blending one topographical feature into another with a sleight of hand. Tightly lined by trees, it only offers the occasional snatched glance of what lies beyond before passing underneath the main railway line to Crewe, then changing status at Chelford.

It’s hard to believe the 535 is worthy of its A-road tag as it leaves Chelford; the confines are so tight, it’s as if it was dropped into a thicket of trees from a great height. Gradually it opens out into near-arrow straights, the view clearing in tandem with it as the trees thin out past the vast expanse of Farmwood Pool, flashes of blue beyond the swathes of green.

The flowing nature of the road encourages a steady rather than brisk pace, something that suits the e-Golf perfectly. It becomes a pleasure to keep moving with minimal energy usage, skimming the accelerator to maintain speed before sending it back with a well-judged lift or touch of the brakes. It feels like you’re beating the system, getting spent energy back to propel you onwards while everyone else sticks rigidly to 19th Century technology.

As if to reinforce the point, the A535 takes you past the jaw-dropping spectacle of Jodrell Bank. The third-largest steerable radio telescope in the world, it towers 50 metres above its surroundings but at the same sits comfortably within them, constantly looking above the Earth to better understand universal phenomena. The A535 continues beyond Jodrell to its natural conclusion at Holmes Chapel, but this incredible feat of engineering is worth a lengthy pause.

As a feat of engineering, it deserves celebration and recognition; serving as a timely reminder of how technological progress can have a positive influence on the planet. The e-Golf is the last vehicle to leave the car park before the visitor’s park closes for the night, and it seems entirely appropriate that it does so silently, powered by energy delivered by the brightest star in our galaxy.

For more information on the Volkswagen e-Golf, visit volkswagen.co.uk