Can the plug-in XC40 cut it as a family car and a low-emissions commuter? We’re running one to find out 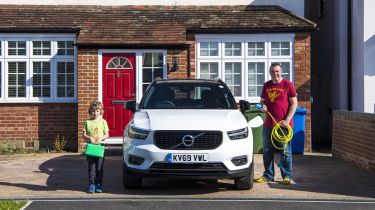 Plug-in hybrid SUVs are fast becoming a go-to for family motorists looking to save on running costs and do their bit for the environment. The idea is that you’ve got access to a petrol engine for longer journeys, assisted by an electric motor that can fully take over when you’re pootling around town. Low CO2 emissions mean reasonable road tax and company-car BiK rates, while the addition of an electric motor means performance gets a welcome hike. What’s not to like?

On paper, it’s a recipe that’s sure to be tempting for plenty of buyers. Our new long-termer – specified in popular R-Design trim, as most will be – is here so we can figure out if the specs translate in the real world.

The XC40 Recharge T5 is a high-tech car. Internal-combustion power comes from a 1.5-litre turbocharged three-cylinder petrol engine with 177bhp, while the 81bhp electric motor (fed by a 10.7kWh battery) is used either to supplement this or for a claimed 28 miles of pure-electric driving. A seven-speed automatic gearbox and front-wheel drive are standard.

We didn’t hold back when speccing ours: bright white paint and orange interior carpets mean it stands out from the crowd. Options include the Winter Pack (£500), Convenience Pack (£600) and the all-important smartphone integration option (£300) that allows for Apple CarPlay and Android Auto connectivity. That latter option should really be standard in our opinion, however: it’s thrown in on many cars costing half as much. 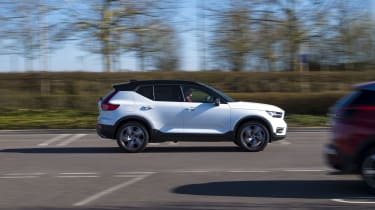 Given the Volvo’s family-car leanings, it comes as a disappointment that powered child locks are an £85 option on top of everything else. That’s not a lot in the grand scheme of things, but doesn’t sit well in principle.

As with all plug-in hybrids, you’ll have to keep the battery topped up to make sure the XC40 remains cheap to run from a fuelling perspective. Lockdown means we’ve managed to run the Volvo exclusively on electricity; charging costs have been kept low thanks to an Octopus Go electricity tariff, so shopping trips have worked out very cheap indeed. Performance in electric mode is adequate rather than exciting.

Once lockdown lifts, we’ll be able to do some more in-depth tests regarding the XC40’s drivetrain and its efficiency. In the meantime, it’ll provide quiet and comfortable transport to the shops.