As one of the older electric cars on the market, the Volkswagen e-up! misses out on a few key safety systems 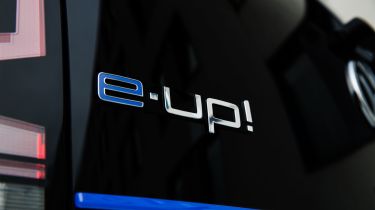 The Volkswagen e-up! has been on sale since 2013, and as a result misses out on some of the more modern safety systems found on newer cars. There's no autonomous emergency braking system, which is unusual in this day and age – especially on a car that'll spend most of its time in and around town.

It should be a reliable car, however. Volkswagen had a strong showing in the 2018 Driver Power survey; a fifth-place finish overall is commendable.

Due to the fact the Volkswagen e-up! continues to sell in small numbers, there's no specific data from our annual Driver Power owner satisfaction survey. The standard up! didn’t feature in the top 75 cars either, but the larger Golf came a respectable 18th.

Volkswagen came fifth overall, which is an excellent finish for the German brand. Any concerns over reliability should be alleviated by the comprehensive three-year warranty and eight-year battery guarantee.

While there's no crash-test data specific to the e-up! available, the standard car earned a reputable four-star rating when it was assessed by Euro NCAP back in 2011. The tests have become significantly harder since, but even so, it suggests the little VW is a tough small car.

Both of the rear seats come with ISOFIX points, while adult occupants are protected by a plethora of airbags – even including one for the thorax. Electronic stability control (ESC) is also standard, alongside anti-lock brakes and a hill-hold function for steep slopes.

Due to its age, the e-up! isn’t available with any kind of autonomous emergency brake system.