As the batteries are mounted under the floor, the Volkswagen e-up! is as practical as its petrol-powered siblings 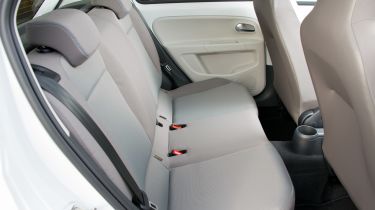 The Volkswagen up! was designed for electrification from the outset, so very few compromises have been made when it comes to practicality. There’s enough space for four people, as well as a fair sized boot and storage spaces. It’s an very practical car for a small city car, especially when you consider it is just 3.6 metres long, although the bigger Renault Zoe has a usefully bigger boot. There is no three-door model: the e-up! is five-door only.

Interior space is surprisingly good given the Volkswagen e-up!’s tiny dimensions. There’s room for four adults to sit relatively comfortably, with a high roofline and enough knee and shoulder room for taller passengers.

Only the driver’s seat alters for height, so the front passenger will have to make do with a limited range of adjustment. Likewise, only the front windows are electrically operated, and the rear windows get the old style pop-out glass. It’s a good job every version comes with climate control.

Interior storage isn’t too bad either, with all the same cubbies you’d find in the standard car. That means a single cup-holder and big bin ahead of the gear lever, as well as decent-sized door pockets and a reasonable glovebox.

Thanks to the specially designed battery pack mounted beneath the floor, the Volkswagen e-up’s! 250-litre boot is just one litre short of the load bay in its petrol-powered sibling. The rear seats fold down to reveal 959 litres of luggage space, which should be plenty big enough for most needs.