The Volkswagen e-up!’s interior has a functional layout, but it isn’t the last word in cutting-edge technology 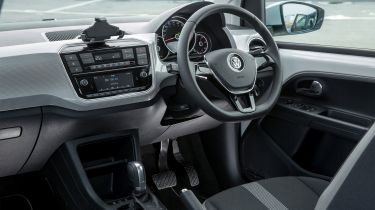 As you’d expect, the e-up! is solidly built, with plenty of high-quality metals and plastics inside. The layout is functional rather than particularly hi-tech, but don’t let that detract from what is a polished city car.

Our biggest complaint is the small infotainment screen and its limited functionality. In a world where many buyers judge a car solely on connectivity, the e-up! feels somewhat outdated. However, the option to add a smartphone cradle does redeem things slightly.

The dashboard in the Volkswagen e-up! is functional rather than cutting-edge. The dials are laid out in triangular formation, with a large central speedometer flanked by a battery charge meter and a power gauge. There’s a small digital screen nestled within, showing things like range and trip information.

In the centre of the dashboard you’ll find a small colour screen for the radio and Bluetooth controls. However, unlike in the larger e-Golf, there’s no touchscreen infotainment system. In fact, you can’t even add it as an option.

Instead, the e-up! can be fitted with a cradle with an in-built USB port, allowing you to affix (and charge) your phone to the top of the dash. It’s a bold move, but in a world where almost everyone has a smartphone, it’s perhaps more useful than you might first think.

Options include various styling modifications, as well as that all-important smartphone cradle for the dashboard.

The Volkswagen e-up!’s infotainment system is best described as basic. Along with the standard car, all facelifted models gained a colour set-up, but functionality is limited and there’s no option for a sat nav.

Instead, you’ll have to make do with the cheap-and-cheerful smartphone cradle. The system sits atop the dashboard, and can be opened and closed to fit a variety of mobile phones. This allows you to use third party mapping apps like Waze or Google Maps.