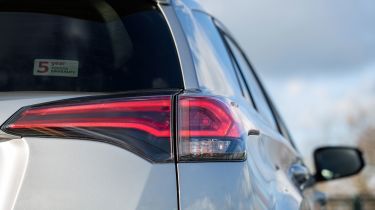 Toyota has managed to preserve a reputation for reliability and build quality it has possessed since its first forays into the UK car market in the 1970s. However, reputation aside, Toyota owners aren't all delighted by how their cars stack up as an overall package.

Safety is one aspect in which Toyota has made considerable progress in recent years, and the RAV4 illustrates this with its array of sophisticated driver-assistance systems.

Toyota finished 12th in our 2018 Driver Power owner satisfaction survey, a mid-table finish in which it scored higher than 14 other brands. The RAV4, meanwhile, finished in 51st place out of 75 cars scrutinised in the survey.

Owners gave their highest ratings in the categories of engine and gearbox, space and practicality. Its safety features were also well regarded. There were fewer compliments about running costs, exterior style or ride and handling, though, and the RAV4's infotainment system didn't impress many owners.

Reliability and build quality was given a middling score, too, with 11.5% of owners reporting at least one fault within the first year of ownership. It should be said, though, that the RAV4 Hybrid wasn't assessed individually and may present a slightly different ownership experience.

The Toyota RAV4 was crash-tested in 2013 by the independent experts at Euro NCAP, receiving the organisation's top five-star rating. This included an 89% score for adult occupant protection, and an 82% score for how it protected children in a crash. It should be said, though, that the organisation has revised its test criteria since 2013, so the RAV4's score shouldn't be directly compared to newer rivals.

However, with the comprehensive Toyota Safety Sense suite standard across the range, the RAV4 has impressive safety credentials. Automatic emergency braking is standard, as is lane-departure warning. Semi-autonomous driver assistance is provided by active cruise control and lane-departure prevention, too. There's also traffic-sign recognition and auto-dipping headlights standard across the range, while top Excel adds blind-spot assistance and rear cross-traffic warnings.

This equipment comes in addition to mandatory safety features such as anti-lock braking, electronic stability control and tyre-pressure monitoring.