Want to electrify your two-wheeled life? We've rounded up some of the best electric bikes for under £1,000 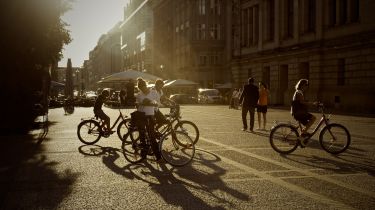 Cycling is one of the best ways to combine personal transport with fitness – it's fast, convenient, cheap and great for the environment. By adding a small battery and electric motor to a classic pushbike, modern electric bikes are intended as an assisted route into cycling.

Electric bikes work by amplifying the power you put into the pedals, rather than taking over completely for extended periods of time. This means you'll still enjoy many of the benefits of cycling, but make swifter progress with the same level of effort. This can be particularly handy if you've got a lot of shopping on-board, want to get to work without breaking a sweat or simply need a bit of help for medical reasons.

We've gathered together some of the best of the cheapest electric bikes on sale under £1,000. It's worth noting that at this price, the vast majority will have had most of that figure spent on the electric drive system as opposed to the bike itself; don't expect a class-leading bike, rather a cheaper commuter-style option with lower-end components.

Best known for its domestic appliances like vacuum cleaners and leaf-blowers, Gtech has now applied its experience with battery technology to two electric bikes.

The eBike Sport is, predictably, the sportier of the firm's two offerings. The bike has a single gear, with a computer used to calculate how best to feed in its electrical assistance. The battery – which looks more like a water bottle – will last around 30 to 50 kilometres depending on how you ride and takes three hours to charge. The belt-drive system in place of a chain is a welcome nod to low-maintenance ownership, but we're not so keen on the brakes, which feel a little basic. 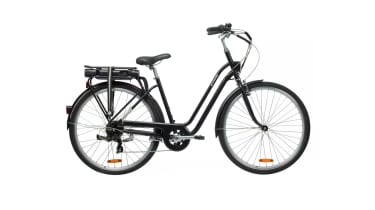 The cheapest bike here at around £650, the B'Twin is sold exclusively by Decathlon, the outdoors and sports shop. This price means the bike has been built to a cost, but it should do the job for most nonetheless.

The bike's heavy steel frame is a byproduct of its cut-price origins, but quality gearing from respected brand Shimano and slick features like integrated lights help lift the overall feeling of quality. The bike also gets mudguards and a kickstand.

The B'Twin uses a 221Wh battery that comes with a two-year warranty; it lasts for a claimed 30 to 45 kilometres (around 18 to 27 miles) and can be removed entirely for charging.

Available from one of the UK's biggest bike retailers, Halfords, the Carrera Subway E feels like a good-quality bike with added electrical assistance. It comes with an aluminium frame, hydraulic disc brakes and Shimano gearing, plus brand-name electrical parts from another well respected manufacturer, SR Suntour. It's a little over our budget but we think it's worth it.

It's fun to ride, feels wieldy and can tackle some fairly unpleasant surfaces thanks to its larger tyres. It's comfortable, too, while the electric element is well proven and works as well as you'd hope.

The bike uses a 300Wh battery and a 250W electric motor mounted on the rear wheel. The motor whines a little when on the move, but is otherwise among the best on this list. 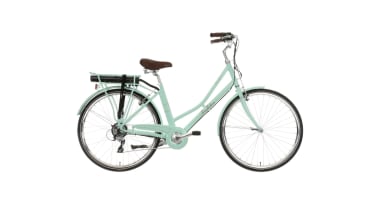 If you like the idea of an electric bike with classic styling, the Pendleton Somerby provides just that. A step-through frame makes getting aboard easy, while the curved handlebars make for a comfortable, upright riding position.

It's a good, relaxed commuting machine built with some reliable parts, including a Shimano drivetrain. Power comes from a 317Wh battery mounted conveniently on a rack over the rear wheel and a 40 to 50-mile range is claimed, with a full charge taking five hours.

We're not fans of the basic brakes, but the Pendelton is still a decent choice. 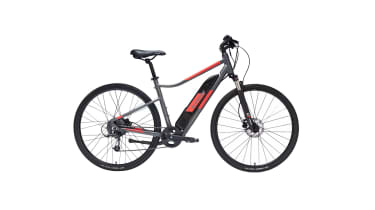 Another suspension-equipped bike, this time from Decathlon's B'Twin brand. With its laid-back geometry but modern styling, the Riverside is a good alternative to the more classically styled options here.

Some decent componentry helps the Riverside look like a good deal, too. Hydraulic disc brakes are a highlight, and while the powertrain isn't branded, it saves money for the bike's electricals.

A 418Wh battery is among the biggest on this list, with an effective claimed range of up to 90km under normal riding conditions, while the 250W motor produces an impressive 42Nm of torque.

Probably the sportiest model on this list, the Carrera Crossroad is an electrically assisted road bike complete with drop-bars and skinny tyres. It's got an aluminium frame and comes with decent-quality standard equipment courtesy of Shimano (the drivetrain) and SR Suntour (the electrical system).

The latter comprises a 310Wh battery that's good for 40 miles on a charge. Mechanical disc brakes aren't quite as punchy as their hydraulic counterparts, but are a welcome addition nonetheless.

The Crossroad feels light but also hard-wearing and is happily lacking any particular weak points. It's a good choice, but note that there's nowhere to mount a luggage rack or bottle cage. 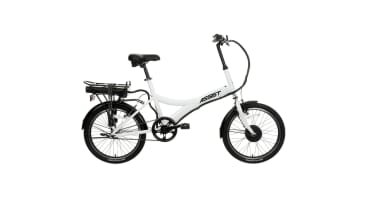 The smallest bike in this group was also the cheapest in the UK when it first went on sale, at least according to its retailer Halfords. Made in the mould of a compact commuter bike, the Assist is compact enough to store easily both at home and the office.

It's simple: a small frame, 20-inch wheels, a single gear and a small battery mounted under the rear rack. It's battery is big enough for a 20 mile range despite its compact size, and can be charged in two to three hours.

There's a distinct lack of name-brand parts here, so quality may not be the best, but the Assist is considerably cheaper than the bulk of the competition at just £599. 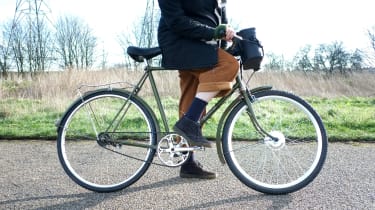 If you have a bike already, there's always the option of converting it into an electric one if you so choose. This kit from Swytch allows you to do just that, with a new wheel with a hub motor and a handlebar-mounted battery.

Whether you have a road bike, a commuter or even a Brompton folding bike, there's a kit available for pre-order on the Swytch website. If you've got basic maintenance skills, the conversion should be easy; if not, it'll take your local bike shop a very short time to do it.

The Swytch kit may be almost as expensive as the cheapest bike elsewhere on this list, but it makes a lot of sense if you already have a decent non-electrified bicycle.