As with so many plug-in hybrids, the XC40 Recharge makes the most sense for company-car users 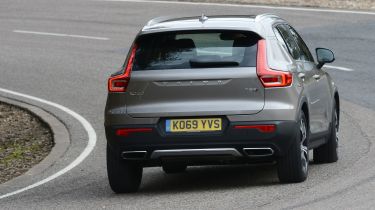 Reduced running costs are a major benefit of plug-in hybrids, but these are most often manifested in lower fuel bills – the XC40 will be a bit more expensive to insure than its purely internal-combustion-engined counterparts and won't cost any less to service at your Volvo dealer. VED (road tax) is marginally cheaper than for an equivalent petrol or diesel XC40.

One downside of plug-in hybrid ownership can be higher insurance costs, due in part to the technology on board and the associated repair costs should the worst happen. The result in the XC40's case is a group 32 rating for all Recharge T5 models, up from group 18 for the entry-level T2 petrol in Momentum Core trim. Insurance information for the Recharge T4 isn't yet available, but don't expect a big drop compared the T5.

All Volvos are covered by a three-year/60,000-mile warranty, while the XC40's lithium-ion battery pack is covered for eight years or 100,000 miles. For reference, BMW offers a three-year/unlimited mileage warranty on its X1 plug-in hybrid, but with a shorter (six-year/60,000-mile) battery warranty.

Exact service intervals vary depending on use, but the good news is that Volvo offers a number of service plans to help spread the cost over two, three, four, five or six years. Plans can be purchased up to 48 months after your car is registered, and include 12 months' Volvo Assistance cover.

Depending on specification, first-year road tax for the XC40 hybrid will be £10 or £25 – this is rolled into the on-the-road price. After that, you pay £140 per year to tax the Recharge T4 models, but as the Recharge T5s cost more than £40,000, you have to pay an additional £325 a year in years two to six of ownership, for a total annual bill of £465 during that time.