The XC40 is efficient and offers a good all-electric range, but you need to keep its battery topped up for the best economy 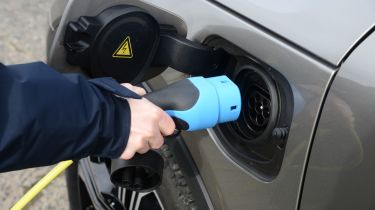 Reduced fuel consumption, low emissions and the ability to travel entirely under electric power are the key selling points of plug-in hybrids, so it's good news that the XC40 Recharge delivers on all counts, regardless of which version you pick. Both the T4 and T5 models have the same CO2 emissions of 47-55g/km depending on specification, and both return a claimed 118 to 135mpg fuel economy.

As is always the case with plug-in hybrid cars, you'll need to keep the XC40's battery topped up to get the most out of it – both in terms of efficiency and performance. Those official figures depend heavily on a fully charged battery to maximise all-electric running time; however, if your daily trips fit into the Volvo's claimed 26 to 27-mile range, you could well go for days without using a drop of fuel.

The XC40 hits all the right notes, but some key rivals offer better on-paper figures: the BMW X1 xDrive 25e, for example, boasts a claimed electric range of up to 32 miles, up to 166mpg fuel economy and CO2 emissions that top out at 43g/km.

The Volvo's economy and emissions figures are encouraging – 47 to 55g/km on average is good news from a company-car tax point of view, and while you probably won’t get near the claimed 134mpg fuel economy in real life, the plug-in should still beat its non-electrified siblings in this area if its battery is kept topped up. In our test of the T5, we found that an electric range of 20 miles is probably more realistic.

Volvo claims a three-hour charge time for the battery (using the optional £50 Type 2 cable) and an all-electric range of around 27 miles with Pure mode selected. Both the T4 and T5 versions come with a seven-metre, three-pin cable as standard.