It's one of the smaller plug-in hybrid SUVs around, but the XC40 is still a practical car for small families 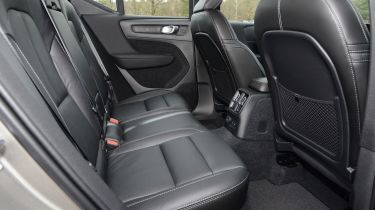 Before its stylish makeover in recent years, Volvo was known for producing some of the most spacious and practical cars on sale. A shift to target the German mainstream has altered that slightly, however, with showroom appeal overtaking outright boot space on the priority list.

The good news is that while the XC40 isn't the biggest plug-in hybrid SUV around, it does a great job of combining its sharp, fashionable looks with decent interior packaging. There's a good balance between passenger and boot space, while those up front get plenty of space to relax on longer trips. Excellent seats are a Volvo calling card and feature here to great effect, with plenty of adjustment for front-seat occupants.

The XC40's squared-off styling pays dividends inside, where rear-seat passengers get plenty of headroom, even if you specify a panoramic sunroof. Legroom is good, too – more than adequate for adults to get comfortable – and while the centre seat is a little narrow and hampered by the 'transmission' tunnel (it actually houses the batteries), it's comfortable enough for short journeys.

Interior storage includes generously sized door bins, seat-back netting, two front cupholders, some handy centre-console trays for phones and smaller items, plus a storage bin under the centre armrest. Elasticated side straps in the boot are also a handy touch. 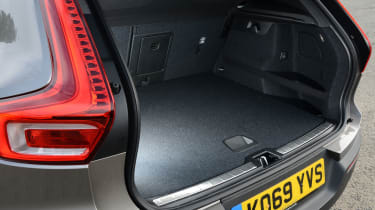 The XC40 was always intended to get hybrid power so there’s no reduction in boot space to accommodate the batteries; the same 460-litre load space remains – 10 litres up on the BMW X3 hybrid. The rear seats fold down to increase this to 1,336 litres. Neither measurement is class-leading, but the boot is a useful shape, while an optional package adds a folding boot floor that can be arranged to stop items sliding around on the move.