For a large saloon car, the Toyota Mirai doesn’t have much room in the rear seats – or for luggage 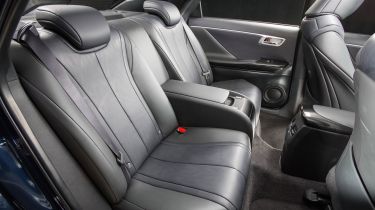 While it will take up as much space in your garage as a Ford Mondeo or Volkswagen Passat, they both knock spots off the Mirai for practicality, as does the Hyundai NEXO. In reality, you can get more luggage into the back of a Volkswagen Golf, and the Mirai only has two seats in the back.

There’s a loads of space up front in the Mirai, with extensive adjustment available for the steering column and seat to ensure drivers of all shapes and sizes should be comfortable. The powered seats and steering wheel slide away when you’re getting in and out, too, so no problems there.

The situation isn’t quite so rosy in the rear, first of all because there are only two seats – albeit the chairs are almost as comfortable to sit in as the ones in front. Legroom is okay but not exceptional, but the biggest problem is restricted headroom for tall rear-seat passengers caused by the Mirai’s tapering roofline – and the fact they’re sitting on top of a hydrogen tank.

Storage is decent around the Mirai’s interior, with good-size door bins and glovebox, plus a lidded cubby under the armrests between both front and rear seats. 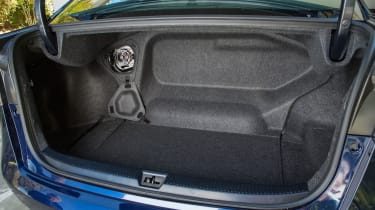 It's as big as the spacious as a Volkswagen Passat on the outside, but the Mirai’s paltry 361-litre boot looks very mean when you consider the Volkswagen Golf has 20 litres more. The Passat musters an enormous 586 litres, but isn’t hampered by the need to cram in an array of futuristic technology, which makes any comparison somewhat dubious. The Mirai’s boot is wide and shallow, and there’s nowhere to fit a space-saver spare wheel, so you get an inflator kit.