The Captur hybrid's small boot will be a sticking point for many, but sliding rear seats are a clever touch 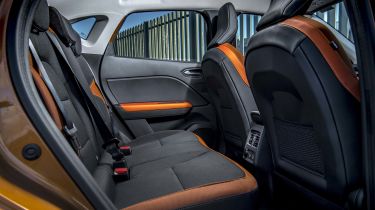 The Renault Captur E-TECH is based on the same platform as the Renault Clio, so it's not the biggest SUV going. However, while it looks much like the car it replaced, the latest Captur is larger in all directions and boasts a flexible interior that's packaged more sensibly than before. The batteries for the hybrid system do cut into boot space, but there's a workaround that should help you juggle between boot and passenger space easily as needed.

Much like the first-generation Captur, the current car has a clever interior that can be adjusted to prioritise space for passengers or luggage as needed, thanks to a sliding rear bench seat. This means if you aren't using the boot, you can free up tonnes of legroom that most other small SUVs can't match. Headroom is plentiful, too.

Each door has a bin that can fit a 1.5-litre bottle, while up front there's a useful spot for your phone and some cupholders on the centre console. Renault offers a rubber liner for the boot, as well as a standard front centre armrest with storage.

Boot space gets progressively smaller in the petrol, diesel and plug-in hybrid Captur models. Sadly, due to its battery, the E-TECH can hold considerably less luggage than the roomier petrol version. There's 265 litres of space with the seats up and the rear bench pushed all the way back, or 379 if you push it all the way forwards. Folding the seats down frees up 1,118 litres in total.

There's still enough space for the car to be usable by smaller families with young children who don't need much rear legroom, but you may want to compare the E-TECH's boot to those of its internal-combustion-engined siblings if you regularly carry adults in the back.