It's not a big load-carrier, but as long as you only need a small commercial vehicle, the Renault ZOE Van is an attractive choice 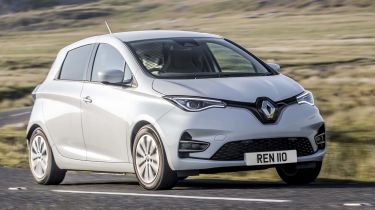 If you want an electric van but don't need something with a large cargo volume, the Renault ZOE Van could be the answer. It's the smallest electric van on sale in the UK (unless you count Renault's Twizy Cargo quadricycle), equivalent in size and capacity to supermini-based commercial vehicles like the Ford Fiesta Van. It has no direct zero-emissions rivals, however: the closest would be the larger Renault Kangoo Z.E. and Nissan e-NV200.

The ZOE Van has actually been available in Europe for several years now, but Renault UK only took the decision to bring it to our shores in mid-2020. Viewed from outside, it's almost impossible to distinguish from the five-seat passenger version of the ZOE, and the interior up front is identical, too. Under the metal, the van gets the same 50kWh battery as that car for the same maximum driving range of 245 miles.

Charging it from empty to 80% capacity from a public 50kW charging point should take just over an hour, while full replenishment to 100% can be completed at a home or business premises in eight and a half hours using a wallbox charger (which Renault is currently throwing in for free when you buy a ZOE).

It's worthwhile getting one of these, as otherwise you're looking at the best part of 30 hours for a 'trickle' charge from a standard three-pin wall socket. The battery is covered against degradation by an eight-year/100,000-mile warranty, while the rest of the ZOE van gets a three-year/100,000-mile guarantee (the passenger variant has the same mileage cap, but its warranty runs for five years as long as you don't exceed it). 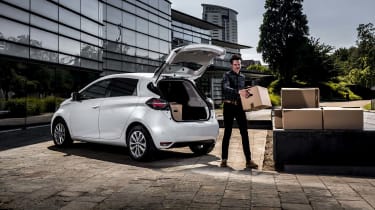 Changes to the ZOE to make it a van (in the eyes of the taxman) include opaque black film inside the rear windows, which are fixed in place, as well as a steel mesh bulkhead immediately behind the driver and front passenger seats. A level floor runs from this bulkhead to the tailgate, making for a conveniently flat load area. A fabric-lined steel frame prevents objects falling out of the rear doors (which can still be opened) and there's a larger version of the standard ZOE's parcel shelf in order to keep the load hidden from prying eyes.

The floor of the load area measures 1.2 square metres and there are lashing eyes to tie objects down and stop them sliding around. There's one cubic metre of load space under the extended parcel shelf/load cover; you can free up more space by ditching the cover as long as you're not worried about your cargo being visible to passers-by. Maximum payload is just 457kg, which is well below Renault's other small electric van offering, the Kangoo Z.E.

That takes care of cargo capacity, but once you get behind the wheel of the ZOE Van, you'll find it drives pretty much exactly the same as its passenger-car equivalent – no bad thing at all, given that the latter was the 2020 DrivingElectric Car of the Year. Acceleration off the line is swift, but it's not the most agile vehicle in the world due to the weight of the battery pack.

So, as long as that modest cargo volume isn't an issue, the Renault ZOE Van is an attractive choice for business users wanting a zero-emissions delivery or transport solution with the driving experience and luxurious touches of a car. Larger vans will obviously suit a broader range of applications, but there's little to dislike about the ZOE as long as its size fits the bill.