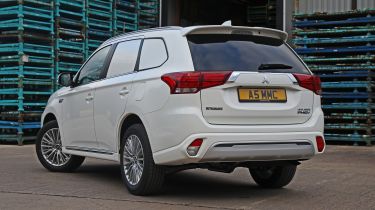 Under the metal, the Outlander PHEV Commercial uses the same running gear as the Outlander PHEV SUV, so it'll come as no surprise to discover that it delivers the same range, economy and emissions. An update at the end of 2018 saw the 2.0-litre petrol engine replaced by a more efficient and more powerful 2.4-litre, four-cylinder petrol.

Mitsubishi claims fuel economy of 139.7mpg for the Outlander PHEV, with official CO2 emissions of 46g/km: this is enough to qualify for free entry into the London Congestion Charge Zone, at least until new rules are introduced in October 2021. Of course, real-world economy depends on how often you plug the Mitsubishi in to charge up and how far you travel on battery power alone.

On a full charge, the Outlander PHEV Commercial will manage a claimed 28 miles on fully electric power. This figure improves in city driving to 35 miles according to Mitsubishi

There’s a standard Type 2 socket and a fast-charging CHAdeMO socket on the Outlander, and it comes with a 10A, 240V five-metre-long charging cable. Charging the 13.8kWh battery takes around five hours from a domestic socket, while a wallbox home charger can do it in three and a half hours.

The fastest charging is from high-voltage public charging stations, which can take a flat battery from zero to 80% charge in around 25 minutes. The nature of how batteries work means it takes longer to get from 80 to 100% full, but a full top-up should take an extra 20-30 minutes on top of that.

The Outlander PHEV Commercial has an eight-year/100,000-mile warranty covering the battery pack. The rest of the electric drivetrain is covered by Mitsubishi’s standard five-year warranty. A mileage limit of 62,500 miles is also in place on this cover, which is shorter than the 100,000-mile or unlimited cover that rivals such as Kia and Hyundai offer.