The Outlander PHEV Commercial has a long load area, although access is compromised 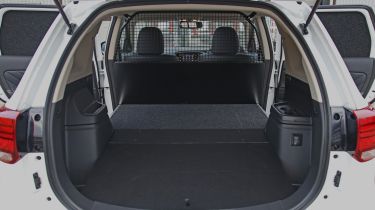 In place of the back seats is a full-length load floor, which has a level load lip at the tailgate end. At the other end, the floor butts up against a steel mesh partition, while the floor’s height creates hidden storage where the now-unused rear-seat footwells are.

Access to the load area is through the same tailgate as the Outlander SUV, while the rear doors remain in place to provide access to the other end of the load area. While this is useful, it’s not as convenient as the sliding doors offered on conventional vans.

Front space is exactly the same as in the Outlander PHEV SUV. That means decent room for two, although the mesh bulkhead behind the front seats does mean the they can’t slide or recline as far back as they can in the SUV.

With an identical layout for the dashboard and doors, there’s the same glovebox, cup-holders and door bins as you’ll find in the SUV, too, so the Outlander PHEV Commercial is reasonably practical, even though it’s only a two-seater. The only real difference you’ll notice is the aforementioned bulkhead behind you, as well as the restricted vision afforded by the blanked-out windows.

The Outlander PHEV Commercial load area offers 1,341 litres of space to the window line, while the maximum capacity to the roof is 2,068 litres. Mitsubishi says the flat load area measures 1.65m in length, with a width of one metre at the narrowest point between the wheel arches. The new 2.4-litre model can carry a payload of 500kg, which is around 200kg less than that of the pure-electric Nissan e-NV200 and Renault Kangoo Z.E. vans.

The Outlander has a rubber floor which can be trimmed with carpet if requested, while the inside of the rear windows have been treated to a textile finish, too, so cargo inside can’t damage the blanked-off windows.