It’s no surprise that the Range Rover PHEV has loads of room inside, although it does lose some boot space to the batteries 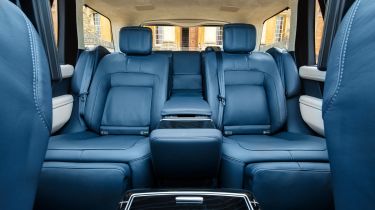 It’s often the case that PHEVs based on existing models have to sacrifice some space to accommodate the hybrid system’s batteries and motors – and that’s true in the Range Rover PHEV.

However, even with 98 litres less boot space and a 46mm higher boot floor, the Range Rover PHEV is still a practical car. Fundamentally, even when you take a bit of space out of a very big car, you’re still left with a pretty big car.

There are limousines that can’t provide as much space for their passengers as the Range Rover. And, if you really want to do your best chauffeur impression, there’s always the long-wheelbase model, which has simply masses of rear legroom. Likewise, despite the amount of space given over to the batteries and the cable, the boot is still vast.

Last, but not least, although the towing capacity of the PHEV is a tonne lower than the TDV6 and TDV8 models, it can still tow 2.5 tonnes – which is very impressive for a plug-in hybrid.

You don’t need the investigative genius of Sherlock Holmes to work out that there’s a lot of space inside a vehicle as big as a Range Rover.

In the front, for instance, the seats are superb and there's enough room for the tallest or widest of occupants. Step into the back, and you’ll see the story continues: not many cars can provide as much room as the Range Rover – and that’s the standard model.

As with every other model in the range, a long-wheelbase version of the P400e is also available and that has even more rear legroom. For the ultimate in luxury, you can choose the Rear Executive Class seat. This exchanges the regular three-seat, 60/40-split bench for two seats that are larger and more thickly padded.

Even better, thanks to the 'access height' function, which temporarily drops the suspension by 50mm to let you climb in, it’s not too hard to get into a vehicle that looks so high off the ground.

There's lots of storage space, too. There are a couple of gloveboxes in the dashboard, as well as big pockets in the doors and centre console. And, if you want the ultimate in luxury, you even have the option of fitting a fridge between the front seats.

One of the downsides of going for the PHEV rather than any other version of the Range Rover is that you lose some boot space. After all, the batteries for the hybrid system have to go somewhere – and where they go is under the boot floor, which is 46mm higher in the P400e as a result.

While the standard Range Rover models have large boots the hybrid loses 98 litres, reducing boot capacity to 387 litres. To put that into context that’s just about the same as a non-hybrid Volkswagen Golf (380 litres) so the PHEV's boot capacity isn’t quite as large as you might expect for this type of vehicle. The other thing to remember is that effectively you do lose a little more boot space to store the charge cable.

What you don’t lose in the PHEV is the famous Range Rover split tailgate – and you can just press a button on the key to open it. So, even in this PHEV, you can sit on the bottom half of the open tailgate while you take your muddy shoes off. What’s more, because the PHEV has the same air suspension as the other Range Rovers, you can drop the car right down to make it easier to load and unload the boot.