Admittedly, you might miss the sound of a V6 or V8, but you certainly won’t feel short-changed by any lack of performance. On the contrary, not only is this a very quick car, the way the electric motors go about their business makes it feel even quicker.

Of course, it’s a big car, but as long as you can cope with that, you’ll find it’s remarkably comfortable to drive or be driven in. In that sense, it’s very like its rivals, as none of them try to be particularly sporty to drive. While they're fast on paper, the emphasis is not on their sheer speed on the road, but on how little effort they demand when going quickly. 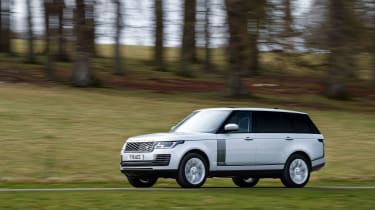 Power for the Range Rover PHEV comes from the combination of a 2.0-litre four-cylinder petrol engine with an electric motor. Together, they produce a total of 399bhp and some pretty impressive vital statistics: 0-62mph takes just 6.4 seconds, which is slightly faster than the V8 diesel-powered Range Rover.

Around town, in particular, the PHEV is in its element, gliding around silently in all-electric mode, but with quick responses. And, when the petrol engine joins in, the two parts of hybrid powertrain work very well together. In most everyday situations, you’ll be hard pressed to spot the car swapping between the power sources.

If there's a problem, it’s that there can sometimes be an alarming pause before the engine kicks in when you want stronger acceleration. And, although the 2.0-litre four-cylinder engine does blend into the background while cruising, it sounds strained and coarse under hard acceleration. 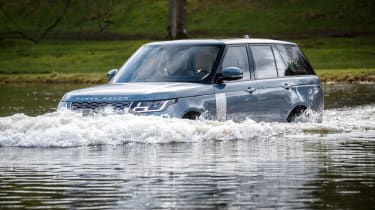 Unless you’ve driven one before, the biggest challenge in driving a Range Rover may well be its sheer size. This is a very big car in anyone’s book, but once you’re used to it, you’ll find it easy enough to drive.

The large windows and big mirrors – not to mention the imperiously high driving position – give a good view of what’s going on around you. So, it’s not as difficult as you might expect to place the car on the road.

Around town, the emphasis is on comfort – and the PHEV certainly is very comfortable. As on other Range Rover models, the hybrid’s air suspension does a really good job of smoothing out rough road surfaces.

That does mean there’s a fair bit of body roll if you start taking corners a bit too eagerly. But, to be honest, the Range Rover isn’t a car that works well when you grab it by the scruff of the neck and drive it hard. It’s at its best when you settle back into a more relaxed driving style. Think of it as a high-rise Grand Tourer and you’ll be playing to its strengths.

To cap it all, Land Rover says that this hybrid is every bit as good off-road as other Range Rovers: very good. That’s because electric power can be delivered through all four wheels, which is a big help off-road.