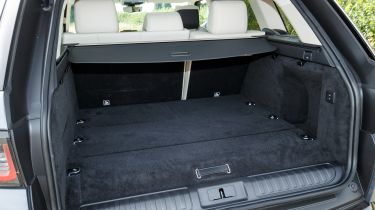 Just by virtue of its name, the Range Rover Sport sounds like an SUV that's more about Sport than Utility. However, that really isn’t the case. In fact, it can take four adults in total comfort in its heavily moulded, bucket-style seats. Admittedly, the centre seat in the rear is smaller and a little less comfortable, but this is still a car that can take five without any real problems.

However, unlike other versions of the Sport, it can’t take any more than five. You can get a seven-seat version of non-hybrid Sports, but because of the amount of room the batteries take up under the raised boot floor in the PHEV, there isn’t anywhere to stash the third row of seats.

For the same reason, the boot in the P400e is also a little smaller than in other non-hybrid versions. However, you only lose 79 litres of space, meaning that there’s still plenty of space for whatever a family cares to throw at it.

As with so much about the Range Rover Sport, its name is a little misleading. You might expect a car that sacrifices space for sportiness. But, despite the Sport having a lower roofline than the Range Rover – or the Volvo XC90, for that matter – there’s no shortage of space and comfort on offer inside.

In fact, the Sport should keep pretty much any family happy, even if it is effectively a '4+1', rather than a full five-seater. In other words, the two front seats and the outer rear seats will take adults in comfort without any problem, but the centre seat in the back is a little narrower – and less comfortable.

However, five seats is as many as you can get in a Sport PHEV. One of the biggest differences between it and other Range Rover Sports is that you don’t have the option of the 5+2 seating layout that makes the Sport an occasional seven-seater. That’s simply because there’s no room to stow the third row in the boot, as a result of the amount of space the batteries take up.

There are some compromises to life with a plug-in hybrid, and in the case of the Range Rover Sport, it’s in the boot. Because of the room taken up by the batteries under the floor, the floor itself is 46mm higher and the boot space (which is 780 litres in non-hybrid models) is cut by up to 79 litres. Mind you, that still leaves a big and very family-friendly boot, which has a larger luggage capacity than you what you’ll find in the Audi Q7 e-tron.