The Range Rover Sport PHEV is certainly a quick car, but the engine’s whine can be annoying 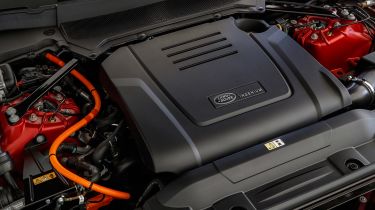 Your first impressions of the Range Rover Sport are that it deserves the ‘Sport’ part of its name – and that’s a direct result of the hybrid powertrain. Around town, for example, the way the electric motor provides instant power means the car responds quickly and will accelerate briskly. And, because it does all that pretty quietly, too, it’s very much in keeping with the luxury expected of a Range Rover.

Then again, as the Sport has the same combination of a 2.0-litre petrol engine with an electric motor as the larger Range Rover PHEV, that’s probably no great surprise. The only disappointments are that the car can occasionally feel a little hesitant from a rolling start – at a junction or roundabout, for example – and, when you have to call on the petrol engine, it can be rather noisy.

As with many similar cars, the Sport PHEV gives you the choice of various driving modes. The 'Save' mode, for example, allows you to keep the battery charge, which is ideal if you’re going to end up in town at the end of a long journey or fancy some silent and green off-roading.

Even if you stay firmly on the beaten track, you’ll be impressed with the Range Rover Sport. Although it’s not quite as sporty or engaging as a Porsche Cayenne, it’s impressively agile for a big SUV.

The Range Rover Sport PHEV uses the same powertrain as the larger Range Rover PHEV, combining a 2.0-litre petrol engine with electric motors. It's known as the 'P400e' engine and provides a maximum output of just under 400bhp.

That’s enough to get the Sport to 60mph from rest in just 6.3 seconds, which is seven tenths faster than the 2.0-litre petrol engine manages. It’s also half a second quicker than the similarly priced SDV6 diesel engine.

Around town, the Sport PHEV picks up speed quickly and quietly, using electric power alone. There are also no complaints about how quickly it can cover ground across country.

However, the 2.0-litre engine only has four cylinders and, when you work it hard to get maximum power or when the batteries are depleted, it’s noisy. And that whine is very much at odds with the luxurious and high-quality feeling you expect of a Range Rover.

The only other irritating aspect of how the car drives is that it can be hesitant when you’re accelerating away from a rolling start at a junction or roundabout.

Don’t let the Sport name and the relatively quick 0-60mph time fool you. As you’ll find the first time you try and get a bit enthusiastic around a corner – dare we say it, ‘sporty’ – there’s no getting away from the fact that this is a big, heavy car. It’s not as sharp as a Porsche Cayenne. But on the other hand, it does at least feel sportier than the Volvo XC90, which is set up to major on comfort.

Last, but not least, despite its hybrid powertrain, the Range Rover Sport PHEV is every bit as good off-road as you'd expect of something with a Land Rover badge on the nose. In fact, the Terrain Response 2 off-roading system has been set up to make better use of the electric motor’s instant torque to give improved control when negotiating low-speed obstacles.