While the Hyundai Kona Electric is as roomy as the petrol and hybrid versions, other SUVs are a lot more versatile 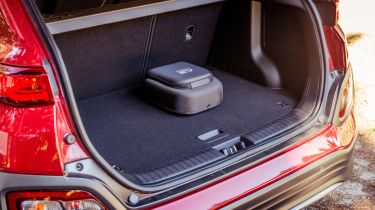 The Kona isn't as compromised for space as some electric cars can be, thanks to its high-riding and relatively boxy body style. It should cope with the demands of daily family usage, but the boot isn’t as large as SUV rivals for those trips away or to the tip.

The Kona’s interior has a light and airy feel and the lack of gearlever between the seats adds to the sense of spaciousness. Front-seat occupants are well looked-after, with comfortable chairs that offer a wide range of manual adjustment in all but the top-spec Premium SE, which has powered seats.

Even in the rear, the seats are reasonably roomy, and there’s certainly enough space for children or teenagers. Trying to cram a pair of six-footers in the back with tall front-seat occupants is a bit of an ask though, as knee and legroom will be tight. In other respects, the interior is practical, with roomy door bins and plenty of storage.

The Kona’s boot space is on a par with rivals like the Nissan Juke, and there are 334 litres to play with when the rear seats are in place. More practical (non-electric) rivals such as the SEAT Arona and Citroen C3 Aircross offer a lot more, though – the latter has up to 520 litres.

You can drop the 60:40 split-folding rear bench in the Kona, but the seats don’t fold completely flat, which further limits ultimate practicality. That said, with the seats dropped, luggage volume goes up to a roomy 1,164 litres.