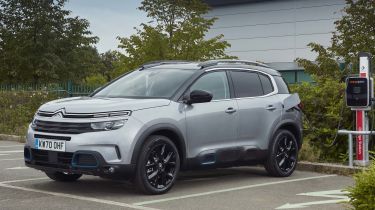 Like almost all plug-in hybrids, the C5 Aircross Hybrid turns up some pretty impressive on-paper numbers when  it comes to fuel economy and CO2 emissions. In reality, you probably won't see these for every journey you do, but the more miles you can cover on electric power alone, the better your overall average will be. That's why it's important to keep the battery topped up as much as possible – usually done by charging up each night at home.

The official fuel-economy numbers for the C5 Hybrid are between 157 and 222mpg, but this is really a best-case scenario under test conditions, based on starting every journey with a full battery. If you do this, you should be able to keep going for 30 miles or more at up to motorway speeds before you have to call on the petrol engine to turn the wheels.

Maximising your economy with this car means charging as often as you can – so how long does it take? Well, you can charge just using a regular three-pin plug, and that might be sufficient for many people, as it'll top up the battery fully in about six hours overnight. There is an extra charge for the cable needed to do this, however.

You can also get a home wallbox installed, enabling the car to charge at its maximum rate of 6.6kW, which will get you a full battery in less than two hours. Unlike some manufacturers, Citroen doesn't charge extra for the on-board technology and cables needed to do this, and at the time of writing, it was running a promotion with Pod Point offering free home wallboxes when you order the car.