If your budget doesn’t stretch to a brand-new car right now, then a used plug-in hybrid might be your best bet for affordable motoring 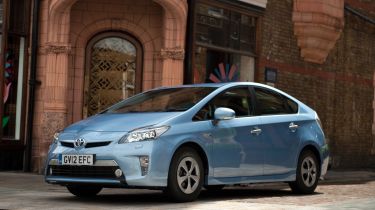 Plug-in hybrid (PHEV) cars are a brilliant prospect if you frequently find yourself travelling short distances: think of journeys like the school run, the weekly shop and the like.

Provided that you can plug in and charge your PHEV regularly, you'll be able to do these trips without using any petrol or diesel at all, instead relying on much cheaper electricity to do the vast majority of your driving. And on the occasions you need to travel further afield, there’s still the convenience and range provided by a conventional fuel tank to fall back on.

While this technology could slash running costs for some, there’s no getting away from the fact that – for now at least – it costs more than simpler petrol and diesel cars. That’s where the secondhand market comes in. Buying a used plug-in hybrid will give you all of the advantages listed above, but the purchase price should be significantly reduced, bringing all sorts of options on the table for those unable to stretch to a brand-new car.

Below are some of our favourite plug-in hybrid cars appearing in used-car listings right now; if you'd prefer something fully electric, we also have a list of the best secondhand electric cars. 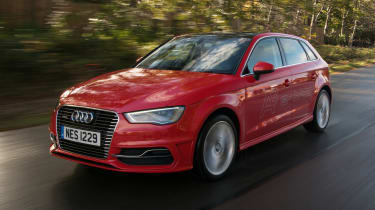 If it’s a hatchback you’re after, the Audi A3 e-tron is a good PHEV to consider. It combines decent practicality and performance with the desirability of the Audi badge. Around 30 miles of electric range from the 8.8kWh battery is up there with some of the newest models on the market, while the 1.4-litre engine and electric motor will get you about with little fuss. Read our full Audi A3 e-tron buying guide here. 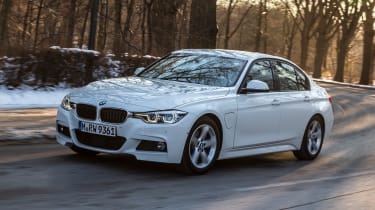 Alternatively there’s the BMW 330e. A new model is now available following the original car’s discontinuation, but BMW’s first attempt still has something to offer. Generally cheaper than the most affordable used C-Class PHEVs, 2016 editions of the 330e can do 0-60mph in 6.1 seconds and will officially return 146.7mpg. A 7.6kWh battery is good for a maximum of 23 miles of electric range, and it can be charged from the mains in under four hours. Read our full used BMW 330e buying guide here. 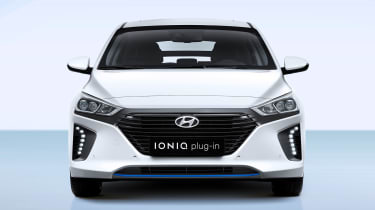 The Hyundai Ioniq Plug-In is powered by a 1.6-litre petrol engine and an electric motor, which produces 139bhp. The car will do 0-62mph in 10.6 seconds, while CO2 emissions come in at 26g/km. ‘Official’ fuel economy stands at 257mpg, but getting anywhere near this depends on how much you use the battery, which will give you up to 39 miles of electric-only range. 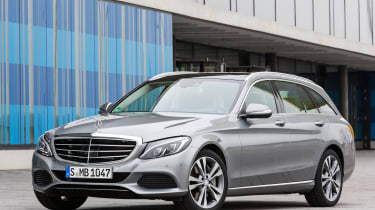 The Mercedes C-Class is another of the UK’s most popular cars, yet the plug-in hybrid C350e model isn’t as talked-about as its petrol and diesel siblings. Perhaps it’ll gain more favour on the secondhand market: 2015 editions of the 350e will do up to 19 miles on electric power, and with a 0-60mph time of 5.9 seconds, they’re reasonably sprightly, too. 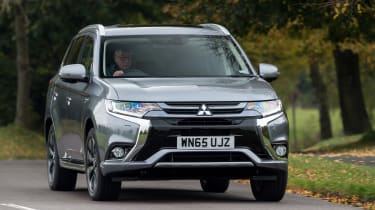 The Mitsubishi Outlander PHEV was the first plug-in hybrid SUV to go on sale, and as such its early models have had longer to depreciate than most. The car will do 0-62mph in 11 seconds and returns 42g/km CO2 emissions. This is well under the threshold of 75g/km to qualify for exemption from the London Congestion Charge. Read our full used Mitsubishi Outlander PHEV buying guide here.

If you’re prepared to take on a car with a relatively high mileage, you could do a lot worse than the Porsche Panamera S E Hybrid. You get official economy of over 90mpg and up to 22 miles of electric range, but it’s the performance that really justifies the outlay. The 3.0-litre engine and electric motor generate 416bhp, and 0-60mph takes just 5.5 seconds en route to a top speed of 167mph. That’s GT car territory. 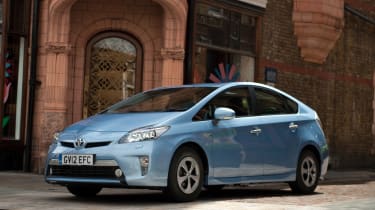 First hitting our roads in 2012, the Toyota Prius Plug-In is one of the oldest PHEVs you can buy. This is good news for buyers on the secondhand market, as depreciation has had time to bring the value of early cars down to really affordable levels. For not much money, you get a practical family hatchback capable of up to 15 miles of zero-emissions electric driving. Read our full Mk3 Prius buying guide here. 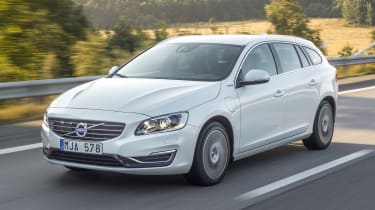 It isn’t often that plug-in hybrids feature a diesel engine, but the first generation of the Volvo V60 Twin Engine is just such a car. You get up to 31 miles of electric range and a 2.4-litre engine capable of 215bhp in conjunction with the car’s electric motor. The 11kWh battery eats into boot capacity somewhat: conventionally-fuelled V60s of this generation have 430 litres of boot space, while this PHEV makes do with 305 litres with the rear seats in place. 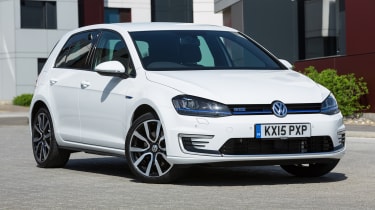 The Volkswagen Golf is one of the most popular cars on sale in the UK, and the plug-in hybrid GTE version extends its appeal even further. Golf GTEs from 2015 onwards deliver 148bhp and 0-60mph in 7.3 seconds, with an 8.7kWh battery returning up to 25 miles of pure electric range. Read our full used Golf GTE buying guide here. 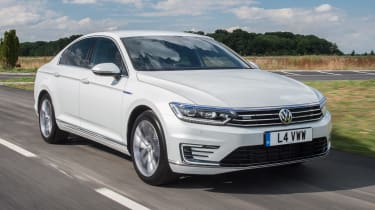 The Passat GTE hasn’t been on the scene as long as the Golf GTE, so prices haven’t had as long to recede from the original value. The 2015-2018 examples of the Passat GTE use a 1.4-litre petrol engine and electric motor to produce 154bhp, while fuel economy is listed as 157mpg. As ever, you’ll struggle to achieve that in the real world, but a 9.9kWh battery returning up to 31 miles of electric range means zero-emissions driving is realistic on most short journeys.