The e-tron has been around for a couple of years, so the parts fitted to this Sportback model should be reliable 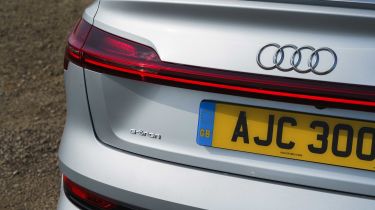 Audi has a very good reputation for quality and reliability, even if this wasn’t backed up by real-life owners in the most recent Driver Power satisfaction survey. However, electric car owners in general are reporting fewer mechanical issues, and given the fact the e-tron has been on sale for a couple of years now, we don’t expect any major reliability problems.

Whichever way you look at it, however, the e-tron is one of the safest cars on sale. With a full five-star Euro NCAP rating, and strong individual scores in each of the individual categories – there are few safer ways to transport your family.

Audi placed a disappointing 21st (out of 30) in the most recent Driver Power survey, putting the brand in the bottom third when it comes to owner satisfaction. Still, that was ahead of rivals like Mercedes and BMW – if slightly behind Jaguar in 12th.

Audi owners were particularly disappointed with their cars’ reliability and build quality, though electric cars are generally more reliable due to the fact there are fewer moving parts and there’s therefore less to go wrong. The e-tron itself, either in SUV or Sportback guise, didn’t feature in the rundown of the top 75 cars, so it’s hard to be any more specific in this area.

This Sportback variant hasn’t been individually tested by independent crash test body Euro NCAP, but the conventional SUV has – posting an enviable five-star rating when it was assessed in 2019. It scored top scores in all categories, including an impressive 91% for adult occupant protection.

This is further helped by a strong list of safety kit – the e-tron gained a 76% score in the Safety Assist category – including autonomous emergency braking, lane departure warning, a plethora of airbags, and of course, Audi’s venerable quattro all-wheel-drive system.