The Audi e-tron Sportback feels like a heavy and cumbersome car to drive; relaxing, but not that much fun 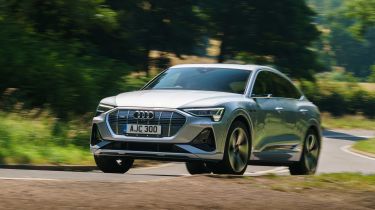 Our first taste of the e-tron Sportback was in 55 quattro form, and we’ve subsequently tried this model on UK roads, too. This is the mid-range offering in what will eventually be a three-strong line-up – below it sits the entry-level Sportback 50 quattro (not offered in the UK at the moment), while above is the Sportback S; the company’s first electric 'S' performance model.

In the 55, the permanent quattro all-wheel-drive system is enabled by a pair of electric motors – one on each axle – while the S uses a three-motor setup, with two of the 55's front-motor axles at its rear, and an adapted version of the standard car's rear-axle motor at the front.

And yet for all this grip and performance, you hear nothing inside. The way Audi insulates its cars’ occupants from the outside world has always been impressive, but the engineers appear to have stepped things up a notch with the e-tron and e-tron Sportback. It’s genuinely one of the quietest cars we’ve ever had the pleasure of travelling in. The ride is excellent, even on 21-inch wheels.

Performance isn’t lacking. With 402bhp, the 55 quattro shoots from 0-62mph in just 6.6 seconds (or 5.7 seconds in S mode) and will keep going to 124mph flat out. That’ll be plenty quick enough for most, despite the fact it falls short of all its main rivals in a straight-line sprint.

In an attempt to rectify that, Audi has also launched the 496bhp e-tron S. This model will perform the 0-62mph dash in 4.5 seconds, and carry on to a maximum speed of 130mph. Spend much time at top speed, however, and your predicted range will drop like a stone.

The Audi e-tron feels much the same as the standard SUV from behind the wheel. That’s to say it’s comfortable and quiet on the move – and not just because it’s an electric car; there’s very little in the way of road noise and the optional digital door mirrors means there’s next to no wind noise from around the A-pillars, either. 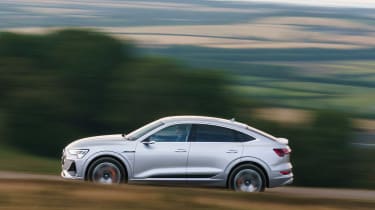 Audi has done everything possible to disguise the e-tron's considerable weight, but there’s no avoiding the fact that this is a 2.5 tonne car. It rides wonderfully, but you’d be hard pressed to call it fun to drive. Grip from the quattro system is excellent, but there’s not much feel through the steering and body control could be better.

Whether the coupe shape really makes any difference to the way this car handles is hard to call without trying the two back-to-back. But regardless, this really is a very relaxing car to drive. At least until you consider quite how big it is; the e-tron feels cumbersome on anything other than a wide three-lane motorway, and things really aren’t helped by those mirrors. Yes, the OLED screens suit the e-tron’s character and give it a hi-tech feel, but they require complete re-calibration of your brain. It just feels a bit alien, and a bit disconcerting.

The triple-motor setup in the Sportback S makes it quite a different prospect to the dual-motor 55. Of course, acceleration feels even stronger, but it's the way the S cleverly distributes all that power across its two axles that's most impressive.

Most of the time, just the two motors on the rear axle are at work, but when you press the accelerator hard, the front motor comes into play too, giving you maximum shove. The car can also vary the amount of power being sent to each wheel in order to boost both grip and stability while turning.

The end result is an astonishing amount of traction when taking corners at speed, making even the twistiest route a 'point-and-shoot' experience. Extensive suspension improvements and sharper steering compared to the Sportback 55 also contribute to the sense of agility in the S.